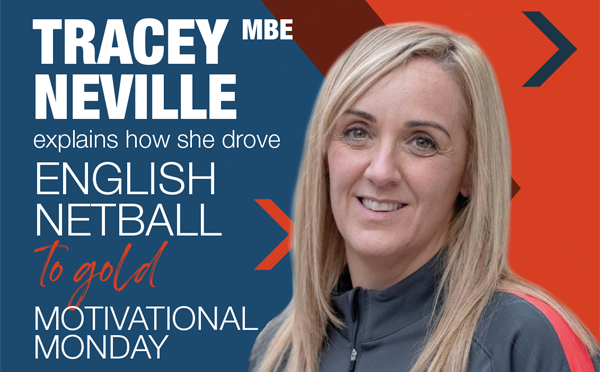 With no time left on the clock, Helen Housby made her shot, the last play of the 2018 Commonwealth Games netball competition. An English team had never appeared in the final, let alone won the gold, until Helen’s shot went in and they beat Australia 52-51.

Tracey Neville MBE, this month’s Motivational Monday speaker, was head coach at the time: “That one goal was something we’d been working towards for 20 years,” she said.

Tracey is from a sporting dynasty: her brothers – Gary and Phil – made names for themselves with Manchester United and England before enjoying long footballing careers.

What makes Tracey stand out is the incredible journey she led the English netball team on, turning around a downtrodden, underfunded programme to create one of the greatest team triumphs of the last decade.

The motivations that drove Tracey were what she came to share with BigChange audiences this month.

Winning over the players

When Tracey came into the coaching role in 2015, she saw how the consistent success of the Australian and New Zealand teams was in large part due to the professional programmes they ran for their players.

“When you’re going against competitors, you can’t cut corners. We needed to step up if we wanted to compete against the top teams.”

Launching a professional programme was a massive commitment that would ask a lot of the coaches and players – requiring them to commit to a full-time training regime, and step away from work and family commitments.

And while the governing board wanted Tracey to make these decisions quickly, she needed to win her players over and make sure they were committed to her vision.

Tracey and her team stayed in constant communication with every individual player in the run-up to the launch, listening to their hesitations and giving them all roles and responsibilities to make sure they knew how important they were to the journey.

“Our persistence and the hard work we put in at the start worked out, we had everyone on board and could start moving towards that gold.”

Adapting to be the best leader for everyone

Tracey also needed to take a hard look at her leadership style.

She brought in two advisors, one focussed on sport coaching and the other a psychologist.

“He specialised in psychopathy, and apparently I’ve got the same mentality. Lucky we’re doing this over Zoom!”

Since she answered to both the sport’s board of directors and her team, Tracey had to learn quickly not to carry the stress of one into the other.

“You need to take on board decisions you don’t necessarily agree with, but I couldn’t put any negativity into my team, and relay those feelings to the girls.”

She learnt to add protected time into her week, where coaches and players had a safe space to share ideas with her.

“This meant there was an avenue to direct needy staff members to and a time to coax ideas out of the more independent ones,”

Tracey worked with her staff around the clock during tours and competitions, so building these meetings into her workflow and keeping her behaviour consistent while her team rode the pressures of competition was crucial.

“We had never made the final, at best it was third or fourth, that was the expectation of our team,”

“We began to celebrate success in team meetings, we tried to push the mentality that ‘It’s good to win’ as an entire group, in units and as individuals.”

This began to break down barriers between newer and older members, as everyone’s strengths and achievements were known and celebrated. It also developed a solution-focused team, who used individuals’ strengths tactically.

Becoming a team at every level

Tracey came into an environment she felt was judgemental. She aimed to create a more collaborative and understanding way of working, which began with clearly understanding the ways in which people worked best.

Her relentless focus on creating a committed, proud, passionate team who understood and respected each other helped pave the way for gold in 2018. Her strong spirit and free-thinking took her to heights no other England head coach had reached.

She ended by saying:

“When you go to a job, it’s not about running along with everyone else, it’s about what you can do. I wanted to go in there and change the face of England netball.”

Tracey was joined by Ash Razzaq, CEO of community-action charity CATCH. Over the past ten years they’ve been working to create positive spaces and outcomes for children in Leeds. During lockdown, they have operated food banks to help people isolating, shielding or struggling. BigChange audiences helped raise £500 for this cause.

Next month, we will welcome Donna Fraser OBE, a former Team GB Olympian and advocate for diversity and inclusion, who will speak alongside the cancer support charity Macmillan. You can sign up to this Motivational Monday here. We hope to see you then.