We all deserve a chance: We need equal opportunities for people with disabilities 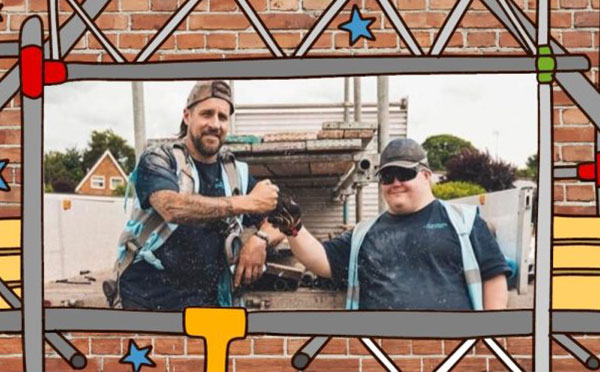 I’m not an angry man. I rarely lose my temper. But when I think about the chronic shortage of opportunities for people with physical disabilities and learning difficulties, I’ll admit, I feel frustrated and enraged.

Every human being on this earth deserves the chance to make something of themselves. To have independence and make their own living. To work hard in a rewarding career and find the purpose and community that fulfilling employment creates.

And yet, too often, doors that should be held open are slammed shut. In all the years I have been talking about equal opportunities for disabled people, I’ve seen very little change.

But I’m not here to post doom and gloom. Today, I want to share an incredible story with you.

It’s a story of triumph over adversity, of compassion, and humanity. It’s the story of Todd Scanlon, a young man with Down’s Syndrome, who dreamt of becoming a scaffolder, and Martyn Coles, the man who made it happen.

‘I didn’t anticipate the reactions we would get’

I connected with Martyn a few months ago. We share a lot of the same values and beliefs, and when I heard about his journey with Todd, I just had to share it. I’ll let Martyn tell you in his own words.

“I’ve known Todd for years. I used to go to school with his cousins. I run my own scaffolding business and for as long as I can remember, Todd has been asking to come and work with me. A few years ago, I said to his mum, ‘Why don’t you let him have a go?’

“It took a couple of years for her to agree. She wanted to be reassured there would be no issues with him working on site, or with my staff. But in the end, she trusted me, and he began working in the business four years ago.

“There are a lot of misconceptions about people with Down’s syndrome. I’m always asked: ‘Do you need lots of extra health and safety processes? What about the risks?’

But Todd is just the same as any other member of my team. If anything, he’s more careful than some of his colleagues. If there’s a big hole on site, and I tell everyone not to go near it, he doesn’t.

Other people on the team might be tempted to go and have a look, but he carries out instructions to the letter.

“The only change we have made to our working process is to introduce some sign language because Todd doesn’t have great hearing. Construction is a noisy industry anyway, so we have some different signs we use to indicate different fittings, so he always uses the right equipment.

“When I gave Todd a job, I didn’t anticipate the reactions we would get. I got a lot of abuse, especially from other scaffolding companies. I was even accused of using Todd for a gimmick, for my own personal gain. It was vile.

“Then, a few years ago, we tried to get Todd into college. No one wanted to know. We have lots of lads here on apprenticeships and they all go to college but the main training provider we spoke to did everything they could to avoid having Todd.

“Even when their assessor came and spoke to Todd and tried to fight our corner, they didn’t want to know. That was a really difficult time for all of us. I sent email after email, called over and over, and the provider kept putting me off.

“Todd would ask me when he could go to college like the other lads, and I had to tell him truthfully that I didn’t know if that would ever be possible.”

The right to an education

“In the end, I started making a lot of noise about Todd. I contacted the CEO directly and pointed out that I wasn’t asking for a free ride. I just wanted to get him assessed. He has the right to an education, just the same as everyone else. She never got back to me.

“However, another training provider heard about our situation and got in touch. They asked me how confident I was that he could complete the training. I said that I didn’t know if he could pass first time, but he deserved a chance.

He went to Weston College to take the assessment and got 88 out 100, which blew everyone away. T

he college came back and offered him a special education needs (SEN) assessment, which was completed in January this year, and the assessor came back and said that yes, Todd has the ability to do the course, and, most importantly, he really wanted to do it.

“I’m under no illusions. This isn’t going to be easy. Todd is going to have to work very hard and we’ll all support him the best we can. The college has been amazing. It’s offering one-to-one sessions to support Todd, and it has created a bespoke programme just for him.

“This isn’t just an incredible opportunity for Todd. This paves the way for anyone else like him to follow the same path.

“We have been getting messages from people all over the world, saying ‘I have a child with a disability, and I never thought they could do what they want to in life, but this proves it’s possible. You have shown it can be done and fought our corner.’

“Even the UK education board has been in touch, asking if they can put something like this in place at mainstream colleges across the country.”

“For Todd, this whole experience has been life-changing. He gets paid a wage every week and he loves the work.

“He only works two days because it’s a tough job and he gets very tired but even on his days off, he’s texting the lads on WhatsApp asking how they’re getting on.

“He loves being part of a team. Now and again, on a Friday, we’ll go to the pub and Todd will buy a round. He’s experienced what it’s like to earn a wage, pay your way and save up to treat yourself.

“We are a small business, yet we have managed to help Todd achieve his dream. Imagine what could be done if all the big businesses across the UK adapted like we have.

“A few companies, like Sainsbury’s, do welcome those with disabilities but the reality is there is still a lot of prejudice out there.

“I’ve been running my own business for eight years and have created opportunities for all kinds of people. Individuals coming out of prison. Guys recovering from alcohol and drug addiction.

“What I’ve learned is that if you manage everyone like a person, focusing on bringing out the best of their abilities, they learn just as well as anyone else.

“They may need a bit more help sometimes but don’t we all?”

“I’m so proud of all Todd has achieved. He has worked so hard and become a global ambassador. Everyone in our local area knows him and says hello. He’s single-handedly changing attitudes just by being himself. Even if Todd decided to quit scaffolding tomorrow, it’s been an amazing journey and opened so many doors. I just hope that Todd’s achievements – and us telling his story – will help convince many other businesses to give someone like him a chance. That’s all anyone with disabilities wants: a chance.”