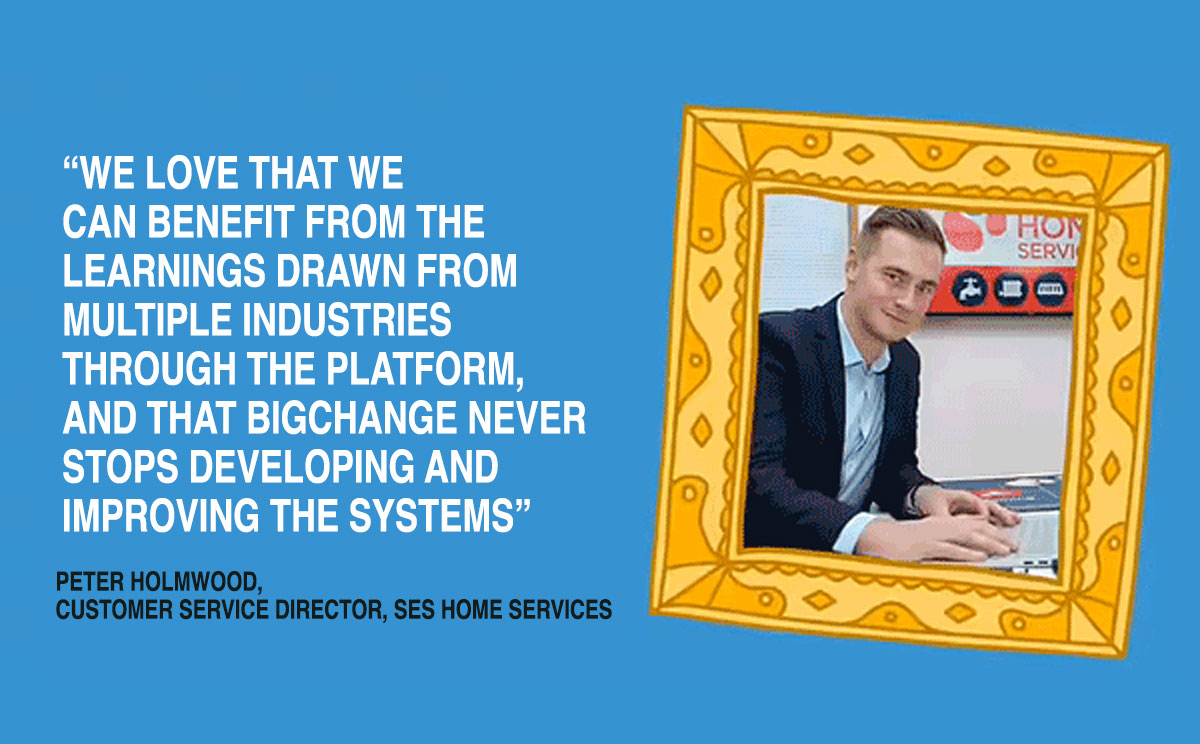 It’s not just the founder or founders of a business who determine its fortunes. The people who join along the way, believe in the vision, and add their own sparkle to the strategy, are just as vital to its growth and prosperity.

This is why I believe it is so important to hire for attitude, promote from within, and give people the opportunity to bring their best selves to work.

When I met Peter Holmwood nearly five years ago and heard the story of how he had risen through SES Home Services, starting on the tools, to become customer service director 15 years later, I was reminded of this phenomenon: the people who join our ventures can be transformative.

I’d like to tell you a bit about Peter, his extraordinary impact at SES, and the power of the intrapreneur.

Peter joined the business straight out of school, having completed his A-levels.

“The plan was to go to university and study construction management,” he says. “But I decided to take a gap year and to join SES, which would give me a strong foundation in a trade, and a deeper understanding of buildings, plumbing and heating systems.”

Just three months into his new role, Peter decided that university wasn’t for him after all.

“I signed up for a plumbing apprenticeship instead and, in 2003, started my three-year course to become a qualified heating engineer.”

Once Peter attained his qualification, he spent five years on the tools, installing and replacing boilers.

But when he tore his cruciate ligament, he had to think carefully about his future.

“It was a bad knee injury,” he says. “When I came back to work, I was put on light duties and started surveying properties instead, giving customers estimates for new boilers or upgrades. That was how I began to migrate away from the tools.”

It wasn’t an easy transition. “I was in my twenties and worried that customers would struggle to look past my age and see me as a capable engineer,” he recalls. This only hardened his resolve to provide an excellent service. He quickly found that if you showed customers that you had heard their concerns, and recommended the right solutions for their property, you won their respect.

“I never worried about trying to hit targets or make more money on a sale, I stayed completely focused on how we could help them. If another company had a better solution, I would be honest about it. That’s how you build trust.”

This approach saw Peter rise swiftly through the ranks of the business, and soon he found himself managing a team. Today, he oversees 75 people.

As all leaders know, it’s easy to be a manager but it’s really difficult to be a great manager.

“As an engineer, you could see the impact of your work every day – when you left a family warm in a home that had no heating before you arrived, for example,” he says.

“In a management role, it’s very different. Successes build gradually over time. You have to talk to your team, find out people’s struggles, and work out how to support them. It’s a much longer game but I now find it extremely rewarding.”

Peter has been an absolute champion of innovation within SES. He introduced the company to the BigChange platform four years ago, migrating away from paper-based processes and an archaic PDA system.

“BigChange has revolutionised the business,” he says. “We love that we can benefit from the learnings drawn from multiple industries through the platform and that BigChange never stops developing and improving the system.

“We have improved our first-time fix rates so that we now beat the industry average. We have also improved our planning processes using the insights the platform collects around travel times and job durations. We are always looking for ways to drive efficiency and JobWatch data is vital in achieving that.”

Peter isn’t done yet. He’s already helped SES diversify into different customer types and sectors, and he is now helping the company enter the renewables space.

“We hope to save customers a lot of money with new energy-efficient solutions,” he explains. “Prices are rising steeply right now, and we want to help our customers afford the future.”

Peter’s meteoric rise through the business means that he is extremely keen to support and promote his colleagues throughout the business. “I feel that I have paved the way for others to progress,” he says. “My time on the tools was vital as it helped me relate to different types of people and understand every single part of the business.”

As for the degree in construction, Peter has no regrets. “There is so much I want to achieve here. The way I see it, I’ve been on the longest gap year of all time.”