CEO’s Blog – Lend me your ears: how I made it in business, despite losing my hearing 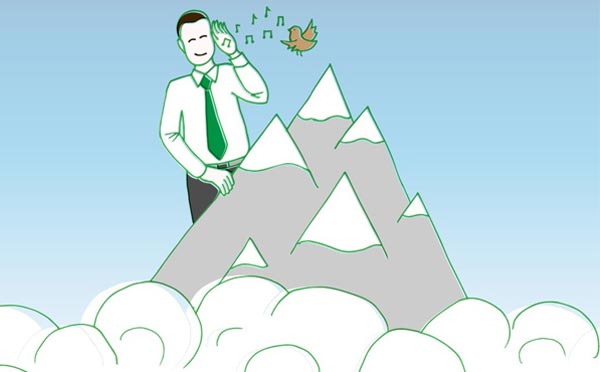 When I was 11 years old, my brother and I went for a hearing test at school. We got the results a few weeks later: my brother had failed the test.

He was asked to go back and take it again. But when he had his hearing checked the second time, he passed with no problems. It was only a long time later that I realised what must have happened. My brother is only a year younger than me, and our results had been mixed up; it was I who had failed that hearing test. Looking back, it’s not surprising that I always struggled in school. I found it really hard to concentrate in classes, and was always fiddling with my pen or distracted. I couldn’t hear what the teachers were saying but even I didn’t realise there was a problem. I just thought that it was normal to go into a sort of trance during lessons. Teachers were frustrated with me. They thought I couldn’t be bothered to try. At home, no one realised I was losing my hearing. My parents were often away and I was brought up by my grandparents. The one clue was that I used to listen to my music really loud. I had two massive speakers above my head, and another two on the sideboard, blaring out Michael Jackson or 10cc, or Earth, Wind & Fire. The noise used to drive my mum wild but it’s hardly unusual for a teenager to like loud music. It was only when I got married that I realised there was an issue. My wife saw that I was mishearing words or completely blanking out whole conversations. That’s when I finally went to see an ear, nose and throat specialist. I found out that I had lost 70% of my hearing, and would need to wear hearing aids. In some ways, it was a relief to know that I was hearing impaired because suddenly so many things began to make sense. I never felt sorry for myself – there are people much worse off than me. On the contrary, it made me even more determined to succeed. People are like cars – some can run forever, without breaking down once. Others need servicing all the time, and that’s me. I started working out ways to cope. In the workplace, it was always hard for me to focus. I found meetings especially hard. My wife advised me to start carrying a notebook and pen, and that revolutionised my work life. It forced me to keep my attention on what was being said – and to check if I hadn’t heard or understood anything. Even now, in this age of smartphone, you won’t catch me in a meeting without my trusty pad and pen. And I always take someone I trust in to meetings with me – usually Andrew, my managing director, who is a very good listener. It’s helpful to have another pair of ears in the room to catch anything I miss. I wear hearing aids., which comes with a unique set of challenges. There is a slight delay between words being spoken and reaching my ears. I also speak much more softly, because my own voice sounds loudest in my head. Travel is a nightmare because I can’t hear announcements. These challenges are frustrating but I have learned to deal with them. I don’t make a big point of telling people that I am hearing impaired. I just get on with it. If I miss something or someone is speaking quietly, I will say that I have a hearing problem and wear hearing aids. It means that if I need to ask them to repeat something, they know why. Most people start speaking a bit louder too, which is great. Except that the extra volume usually lasts for about two minutes and then they forget. Over time, my hearing has worsened but I’ve been very lucky – technology has come on leaps and bounds. I have 80pc hearing loss now but I wear Bluetooth-enabled hearing aids that are connected to a microphone hidden behind my tie. It means I can hear myself when I talk. It also means I can take phone calls direct to my hearing aid. People stop and stare when I do it, because they can’t see who I am talking to and think I’ve gone mad, which I rather enjoy… In business – and in life – I’ve always been very solution-orientated. If there’s a problem, I want to find a way to solve it. I tackled my hearing in the same way. My hearing problem has also made me very aware and accepting of other disabilities. We need to do more for people who are struggling with something they cannot control, whether it is a physical or learning disability. This is a cause that is close to my heart – I hope to talk more about this in a later post. For now, I’ll just say that any disability opens your mind to the world in ways that most people don’t see. As an entrepreneur there are many mountains to climb. My hearing loss was just another mountain, so I climbed it. My next mountain? Learning to lip-read.

All the best Martin