CEO’s Blog – Department for Transport today published figures today revealing that there were 1,793 reported road deaths in Britain in 2017, five a day on average 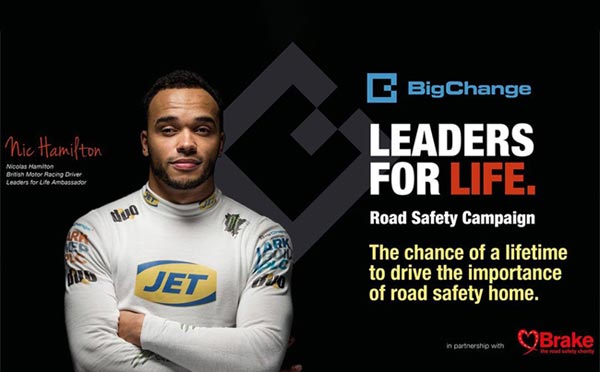 Leaders for Life was developed by BigChange in partnership with road safety charity Brake, and is supported by the racing driver Nicolas Hamilton and several prominent business leaders.

Department for Transport today published figures today revealing that there were 1,793 reported road deaths in Britain in 2017, five a day on average, and 170,993 casualties of all severities.

Leaders for Life was developed by BigChange in partnership with road safety charity Brake, and is supported by the racing driver Nicolas Hamilton and several prominent business leaders. BigChange is offering its driving analysis technology free of charge to the leaders of medium and large UK businesses, to help them understand how safe their driving is and take steps to improve it.

BigChange is providing its driving analysis technology free of charge to business leaders so that aspects such as speed, braking, acceleration and cornering can be evaluated. It will provide confidential feedback on leaders’ driving habits and donate £1,000 each month to Brake on behalf of the best and most improved drivers. BigChange’s technology is already used to monitor the driving habits of 20,000 company drivers in the UK.

BigChange aims to recruit more than 1,000 business leaders to support its campaign by acting as role models for road safety by the end of the year. Des Evans OBE, formerly managing director of MAN Truck & Bus UK, Richard Burnett, Chief Executive of the Road Haulage Association, and the British racing driver Nic Hamilton are among the leaders who have already agreed to take part in the campaign.

Martin Port, CEO of BigChange, comments: “The technology now exists to monitor how safely people drive in a cost-effective and non-intrusive way, yet far too many companies simply pay lip service to road safety and do nothing to encourage better driving by their employees. More than 500 people are killed each year by people driving for work in the UK, we are launching Leaders for Life to reduce this number by making business leaders role models for road safety.”

Mary Williams OBE, chief executive at Brake, comments: “More than a fifth of all deaths and serious injuries on our roads involve someone driving for work. This statistic is a stark illustration of why CEOs must make safe driving a priority for their business. Brake is proud to support Leaders for Life, a fantastic initiative from BigChange, which helps CEOs to lead by example and promote safe driving behaviour to their employees.”

Nic Hamilton, racing driver and ambassador for the Leaders for Life campaign, comments: “The place for rapid acceleration, driving quickly, braking late and cornering at speed is for the track, not the road, and even for racing you have to earn your stripes and complete a test to get your licence. It’s fantastic to see BigChange and Brake engaging business leaders as role models for safer driving in this campaign. I am delighted to be supporting the Leaders for Life campaign and I would urge all business leaders to sign up and play their part in reducing risk on Britain’s roads.”

Business leaders wishing to be ambassadors for safer driving can register to support the Leaders for Life campaign at https://www.bigchange.com/leadersforlife/.